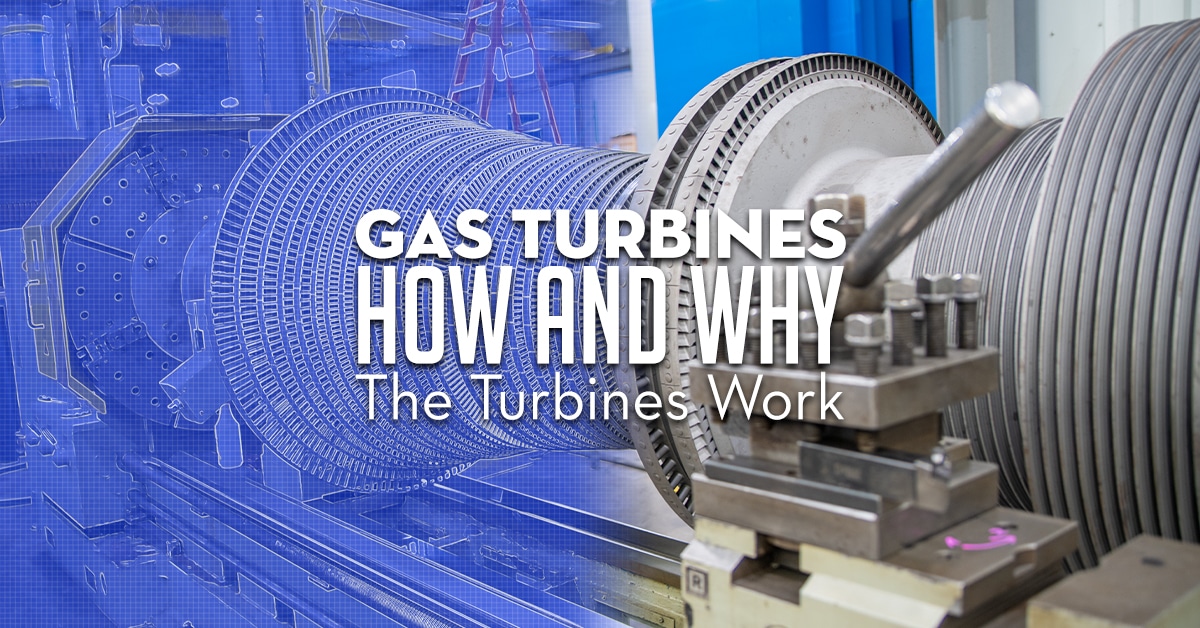 A gas turbine produces electricity or provides kinetic energy by using compressed gas and air to spin it. The Brayton cycle is the method for doing this. The pressurized gas in all modern gas turbines is produced by burning fuel such as natural gas, jet fuel, kerosene, propane, or hydrogen. The fuel’s heat causes the air that is being used in the turbine to expand, producing helpful energy. Essentially, gas turbines contain three essential components. The components, as well as the benefits of using a gas turbine, will be discussed in the following article.

The gas (combustion) turbines seen in many of today’s power plants essentially have three primary sections. The engine’s compressor pulls air in, pressurizes it, and sends it to the combustion chamber at high rates of speed.

The combustion system is typically composed of fuel injectors or fuel nozzles that continuously pump fuel into the combustion chamber where it’s combined with air where temperatures over 2000 degrees Fahrenheit are reached. A high-temperature, high-pressure gas stream is created during combustion and enters and expands only through the turbine.

A complex arrangement of alternating static and rotating airfoils makes up the turbine. The rotating blades are spun as hot combustion gas expands through the turbine. The turbine has two purposes: they power a generator to generate electricity and operate the compressor to push more pressurized air into the combustion chamber.

Gas Turbines for Land and Efficiency

The turbine’s temperature is one factor in determining its fuel-to-power efficiency.

Higher efficiencies are typically associated with higher temperatures, resulting in more cost-effective operations. Although the gas passing through a typical power plant turbine can reach temperatures of up to 2500 degrees Fahrenheit, some of the turbine’s key metals can only endure temperatures of 1500 to 1700 degrees. Therefore, air from the compressor may be used to cool important turbine parts, lowering overall thermal efficiency.

What are the Advantages of Gas Turbines?

One of the main contributing factors that increased the popularity of gas turbines is their lower operational costs. The initial operating cost of gas turbines is relatively low compared to other low-carbon emission options like nuclear and renewable energy. Gas turbines are thus one of the best solutions for producing cleaner energy and being cost-effective.

Gas turbines have been the most practical choice due to strict carbon emission restrictions, fluctuating fuel prices, and an emphasis on outstanding performance at low cost. They are not only affordable, but they are also reliable, efficient, and have minimal operational failure and downtime. Gas turbine manufacturers have developed highly dependable turbines that need maintenance less frequently.

Industrial gas-turbine engines have a typical size range of 1,000 to 50,000 horsepower and can be used for various purposes. These include using a tiny portion of the piped gas as fuel to drive compressors that pump natural gas through pipes. Such devices can be automated, requiring only sporadic on-site supervision.

The Houdry process involves passing compressed air over a catalyst to burn off deposited carbon and can also use a gas turbine to refine oil. The turbine is powered directly by the hot gasses without a combustion chamber. To pressurize the air needed for the process, the turbine, in turn, drives a compressor. Small, portable gas turbines have also run pumps with centrifugal compressors.

Aircraft units were used in early commercial stationary plants operating at lower turbine-inlet temperatures. To operate electric generators, specific gearing was needed due to the high rotational speed of aviation turbines. More recently, specialized machines were created for direct operation at 3,600 revolutions per minute (in the United States).

Although units have been built at sizes up to 550,000 kilowatts, the bulk of installations is under 100,000 kilowatts. These turbines run on liquid fuels or natural gas for up to 6,000 hours annually. Large units typically have turbine-inlet temperatures between 980° and 1,260° C, with turbine blade cooling employed at higher temperatures.

Fuel is burned in a high-pressure combustion chamber of the gas turbine, and the byproducts are pushed into the turbine. A turbine has specifically designed blades attached to a central shaft, and the shaft rotates as the high-pressure gasses pass through. The shaft is spinning ferociously. It is frequently coupled to a generator that produces electricity.

The shaft may occasionally be attached to a compressor. Numerous industrial and commercial applications for compressing gas or vapor using compressors exist. Gas turbines are a great way to produce energy. They have three main components that help them run more efficiently and create less waste.

The Brayton cycle is the process used to make these turbines work, and it has been refined over the years to be as effective as possible. Another significant advantage is that gas turbine power facilities are environmentally favorable. They release fewer pollutants from exhaust emissions than internal combustion engines, in addition to using natural gas as a fuel.